Here’s one where I saw the movie first, then was inspired to read the book. In cases like these I am often left having enjoyed the movie more, but there is that rare occasion when the book fulfills my expectations and then some (Harry Potter). This, however, was not one of those occasions.

This novel, as we all know by now, is derived from the author’s experiences working for Vogue’s editor-in-chief. While the anecdotes of a crazy boss are often amusing, I also found that most of the time instead of sympathizing with Andy, I found myself annoyed with her. Sure, she had to take the job, sure it was a great opportunity that she just had to live through for a year, etc., but most of her problems, such as her failing relationships with her boyfriend and best friend are truly her own. Working in Hollywood, I am no stranger to high maintenance people, there is at least one on every show, and I’m also very familiar with long hours, being available by cell 24 hours a day, and working 7 days a week. And yet, I have somehow managed to maintain all my relationships, including best friends and a boyfriend whom I live with and rarely see. Andy often complains of her salary being next to nothing, yet at one point indicates that it may be around or more than $1,000 a week, nearly twice as much as I made when I was a “gopher” (and LA is just as expensive as NY, so there’s no arguing about cost of living). Also, I can’t imagine that those designer clothes and handbags were difficult to accept as perks. Out here we get t-shirts declaring the movie we worked on and a hat if we’re lucky. Maybe it’s because of all this that I found it hard to read this book with sympathy, and maybe those who work real 9-5 jobs with real salaries will be appalled at the hours and things that Andrea does for Miranda. However, I felt the book was too chatty and whiny for my tastes. It has lots of anecdotes, little drama, and no arcs or growth for any of the characters.

The Movie:
…and yet, I really enjoyed the movie. Due in large part to the wonderful performances 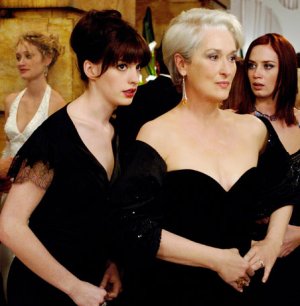 in this film, everyone is so much more believable on screen than in print. Andy is less whiny, Emily is more catty, and Miranda is far more wicked. Sure, Andy lets it get a bit out of control, but she’s more sympathetic and I found myself thinking that she really needs more understanding friends. The changes regarding how Andy leaves Miranda make her seem far less b*tchy than in the book and make Miranda seem like an actual human, if only briefly, which is perfect for the character. Great costumes, music, and some well cut montages show that this story is better visually than in print. There is a lot of drama added, but it all comes together to give the film actual values and makes it’s characters grow in a way the book can’t seem to pull off.

What’s Missing:
Lily, Andy’s best friend and roommate, who sinks from fun, party going best friend, to a promiscuous and depressed alcoholic whose car accident causes Andy to leave Paris. (There’s a Lily in the film, but she’s just another friend of Andy’s who ends up disappointed in her.) B-DAD, the exciting, jovial Texan husband of Miranda who is incredibly sweet to Miranda’s assistants, though is often a lot for them to handle. (Think Bullet from The OC.) Andy’s family (except the brief visit from Dad): the parents that complain about her job and the sister who has a baby that Andy doesn’t even meet until she’s finally free from Runway.

What’s New:
First we trade “Alex the teacher” in for “Nate the chef.” Then we have job scandal. Divorce. Cheating other people out of their jobs or promotions to benefit oneself (whether one realizes it or not). Car accidents. Hospitals. Sex. The impossible task of getting the Harry Potter manuscript, conceivably before it’s even written. available domains . Plus, a much more pleasant ending where we trade curse words and comas for wordless exits and kind job references and a more promising future for our Andy and “Nate the chef.”

Overall Adaptation:
Here’s a great example of a direct adaptation that takes its gratuities with the source material. They took a lot of scenarios, even lines of dialogue, from the book, yet they developed the characters into actual humans and added a lot of drama to give it’s characters plot lines, obstacles to overcome, and goals to achieve.