I love Sin City and I love Frank Miller’s comics, but I’m still not sold on The Spirit. It really irritates me when people talk about “Frank Miller movies” and his “film style” when they fail to realize that he has no style yet. Sin City was only co-directed by Miller; the actual directing was done by Robert Rodriguez. He brought Miller on as a co-director in order to preserve the style of the comic books. Miller had previously never allowed his work to be filmed, but when Rodriguez offered him co-director credit and an opportunity to be on the set to be certain that Rodriguez wasn’t screwing up his work, he agreed to let him make Sin City. Miller had little to no part in the actual directing of the film and the style is literally his comic book brought to life.

The Spirit is Frank Miller’s actual first film, as he is directing someone else’s material in his first solo effort. So far, it all looks like a cheap Sin City to me, as though he hasn’t actually developed his own style and is simply aiming for the praise that Sin City earned. I’m nowhere near being sold on The Spirit yet, especially since there’s just no reason to give it that Sin City style. I will give Frank this though, this is the third Comic-Con I’ve seen him speak at and this was the most vocal I’ve ever seen him. He’s normally very quiet and introverted during panels with short answers, yet he seemed very enthused to show some Spirit footage for us. He brought out some of his cast: Gabriel Macht (The Spirit himself), Jamie King (Lorelei Rox), and Samuel L. Jackson (The Octopus) and showed us various clips from the film.

The first clip showed The Spirit with one of his many women, Ellen Dolan (Sarah Paulson) as they have an intimate conversation. The second clip was prefaced with a long explanation of this new technology that they used in order for the actors to look like they were underwater though they actually weren’t…however it didn’t look to me as though they were underwater at all. The clip showed Sand Saref (Eva Mendes) looking for something in a lake when The Octopus shows up. The final clip was a campy fight sequence between The Octopus and The Spirit, and the closest thing to the actual source material.

The problem with all these clips was that they all looked like they were from different films. The first conversation appeared out of a 50’s noir flick, the second underwater sequence out of a cheesy sci fi flick with bad effects, and the third appeared to be a campy super hero flick, which is what I think the rest of the film should look like. It all makes me just a little nervous that Miller’s trying to do too much in his first outing. If anything though, it certainly looks like he’s enjoying himself. 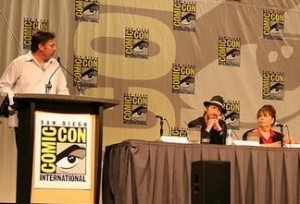