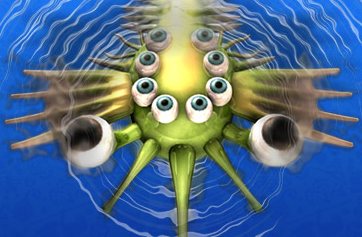 “Spore“, from the makers of “The Sims” and “Sim City”, has to be one of the coolest video games I have ever seen. It takes the ideas behind both “The Sims” and “Sim City” and expands on them in ways I never thought possible. You start as a single cell, and you first have to fight to survive, then evolve into a species, a civilization, and ultimately a galaxy with countless planets and unlimited possiblites. Keep reading for more details and videos about “Spore“.

First up, this video is one of the TV commercials for the game. I thought it could describe the game a little better than I could while also showing how cool it looks visually.

Next up, I found this interesting behind the scenes/interview and overview with the game’s creator, Will Wright.

“Spore” came out last weekend, and you can learn more about the game at its official site, located here.

Posted on September 10th, 2008 by ThePit | Leave a Comment
Filed Under Entertainment