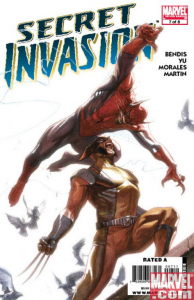 Marvel Comics’ official description: “THIS IS IT!! The Marvel Universe versus the Skrull Empire – a battle of unity and spirit the likes of which the Earth has never seen. The comic event of the year starts its shocking conclusion.”

Personally, I’m waiting for the story in trade paperback.  After Civil War, I soured on waiting for months between cliffhanger issues and would prefer to read it all together.

Posted on October 23rd, 2008 by ThePit | Leave a Comment
Filed Under Entertainment