The Hoff Returns to Daytime TV (this week)

The time is here! The Hoff returns to The Young and the Restless! 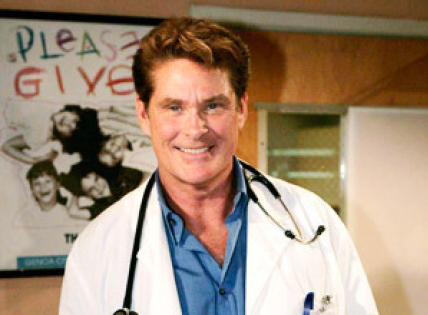 Starting tomorrow, Tuesday June 15th, David Hasselhoff returns to the show that launched his career, The Young and the Restless. Hasselhoff steps back into the role of Dr. William “Snapper” Foster, who was last seen in Genoa City in 1982, before Snapper left to teach a three-month fellowship in London. Of course, like many soap characters who leave to do something overseas, he never returned.  The Hoff will be guesting on the show for 5 episodes, taking him through June 21st.  You can catch a video preview of Hasselhoff’s return.

Returning to the Soaps that made you famous seems to be an in thing lately. Nathan Fillion returned to One Life to Live last year, and now comes word that fan favorite Vanessa Marcil will be returning to the role of Brenda on General Hospital this summer.  In addition to big stars going back to soaps, there have been some recent movie stars making the first time jump to the genre, most notability James Franco’s General Hospital stint, which he’ll return to later this month. Franco will be returning to the daytime drama and will be taking with him veteran film and television actor Bruce Davison.

Will you be watching Hasselhoff’s daytime return? Excited about other stars returning and some making their daytime debuts?