Hollywood the Game has gotten a front page face lift. Check out this screen cap from the Hollywood simulation game. 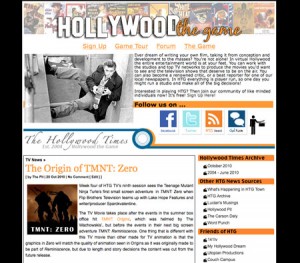 Ever dream of writing your own film, taking it from conception and development to the masses? You’re not alone! In virtual Hollywood the entire entertainment world is at your feet. You can work with the studios and top TV networks to produce the movies you’d want to see and the television shows that deserve to be on the air. You can also become a renowned critic, or a beat reporter for one of our local newspapers. In Hollywood the Game everything is player run, so one day you might run a studio and make all of the big decisions! Interested in playing HTG? Then join our community of like minded individuals now! It’s free!

You can learn more about Hollywood the Game by heading here.

Posted on October 25th, 2010 by ThePit | Leave a Comment (2)
Filed Under Entertainment