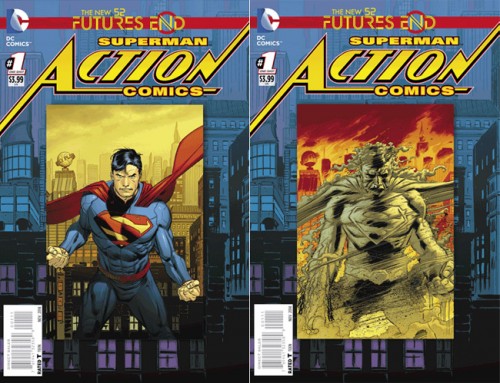 You can’t tell from the above image, but this issue (along with so many others) has a 3D motion cover. The image changes from the left graphic to the right one, etc. It brings me right back to the gimmick covers of the 90s. Anyhow, just in time for September’s third anniversary of DC Comic’s “The New 52” relaunch comes a universe wide tie in to DC’s event series “Futures End”. The series has spotlighted what “The New 52” universe looks like 5 years into the future after a multiverse war has changed the status quo big time.

Action Comics: Futures End #1
Official Description: With the Man of Steel missing, ordinary people around the world start to mysteriously exhibit his strengths and abilities…

The issue comes from DC Comics on September 3rd, 2014 with the cover by Lee Weeks, art by Pascal Alixe, and writing by Sholly Fisch.

Have you been following the weekly “Futures End” series? Excited to see spotlight stories set in the bleak future across titles?

Posted on August 31st, 2014 by ThePit | Leave a Comment
Filed Under Entertainment