Heritage Union Life Insurance is giving away a free “Keep the Dreams Alive” T-Shirt. The shirts come in blue (pictured below) or pink. Read more for a description of Heritage Union and get your free shirt! 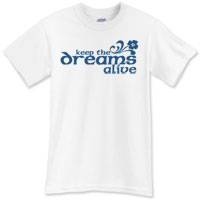 END_OF_DOCUMENT_TOKEN_TO_BE_REPLACED

Posted on August 25th, 2008 by ThePit | Leave a Comment
Filed Under Free Stuff

I have no idea why this isn’t one of the most popular sites on the net. Pandora is a personalized online radio station. Not only is it really easy to use, but you don’t even need to register to get started. Right when you get to the homepage, the site asks you what artist or song you are in the mood for. From there, your personal radio station chooses music with similar styles that it thinks you might enjoy. If you don’t like a particular song, you give it a thumbs down, it shuts right off (moving on to the next song), the station apologies and promises not to play that song or others too much like it again. If you decide to register an account with Pandora, then you can save your stations and listen to them at any time. The longer you have a station, the more songs that it learns that you like or dislike, which makes sure that you never have to change the station. You can hear it for yourself here.

Posted on August 25th, 2008 by ThePit | Leave a Comment
Filed Under Entertainment

The Pit: Bits and Pieces from Around the Web

The game features Realm vs. Realm gameplay combat, which means you’ll be fighting with and against other real players in a never ending war of the worlds. You can find out more info about the game at its official site and watch an awesome cinematic for the game below.

How long do you think it will be until they make this into a movie? In the very least an animated feature.

“Superman Doomsday” marks the beginning of a new era for DC Comics animation. Produced in the style Bruce Timm made famous with “Batman: The Animated Series” and “Superman”, this film is adapted straight from one of DC Comic’s most famous storylines (the Death and Return of Superman) and was made for adults. The violence in the film is brutal and unforgiving. Nothing is held back in Doomsday’s rampage, or that of the Eradicator’s (fans of the comic will recognize that name that is sadly never mentioned in the film). One character’s death leaves a nice sized pool of blood and the image of a sheet draped over a murdered 7 year old girl is unsettling. I highly recommend viewing the film before you let anyone under 13 years old watch it.

END_OF_DOCUMENT_TOKEN_TO_BE_REPLACED

Live on the East Coast and want to see “Trick ‘R Treat” for free? Check out this post in our Free Stuff section for more details.

Posted on August 23rd, 2008 by ThePit | Leave a Comment
Filed Under Entertainment

Fangoria has announced that they will be holding a free screening of the long delayed horror anthology “Trick ‘R Treat” in New York City on October 13th. The screening will be the film’s East Coast premiere and will be introduced by the film’s director Michael Doughtery (co-writer of “X-Men 2” and “Superman Returns”), who will stick around afterwards for an audience Q&A.

The film stars Anna Paquin, Brian Cox, Dylan Baker, and Leslie Bibb. IMDB lists the plot of the film as follows; “Four interwoven stories that occur on Halloween: An everyday high school principal has a secret life as a serial killer; a college virgin might have just met the one guy for her; a group of teenagers pull a mean prank; a woman who loathes the night has to contend with her holiday-obsessed husband.”

Click here to find out how to get your free tickets to “Trick ‘R Treat”.