With hit movies able to surpass the $100 million mark and video games being all the rage, is it any wonder that the two often go together?  Ever since the release of the film adaptations of such games as Street Fighter and Mortal Kombat, the film world has been searching for that next great franchise.  To help give you a better idea of what’s to come, we have gathered the five video games which were turned into the Top Video Game Movies of all time.

1. Resident Evil
When this horror game about killing your way out of a mansion full of zombies first debuted, no one thought it would be the highest grossing video game franchise of all time.  There are four cinematic film entries starring Milla Jovovich, which have totaled over $500 million in box office sales, and another big screen adventure in the works.  There are also various animated films of the game that are available on DVD.

2. Tomb Raider
Angelina Jolie is perhaps most recognized for her role as Laura Croft from the various Tomb Raider games.  Much like the above, the game often involves fighting your way out of haunted tombs and features a female lead character. The two feature films with Jolie as Croft grossed over $430 million in ticket sales. While they will not be completing a trilogy with Jolie, studios are itching to continue the franchise on the big screen with a new lead actress.

3. Prince of Persia
The old PC game found new life as a movie and in several other gaming platforms.  However, with top notch action producer Jerry Bruckheimer leading the way and Jake Gyllenhaal in the lead role, the movie made over $312 million at the box office. This makes it the single highest grossing video game movie of all time.

4. Mortal Kombat
Although the first entry to this film franchise debuted over 15 years ago, it remains one of the top video game films of all time.  The first film made over $122 million at the box office, while the sequel Annihilation made $51 million. This puts its total at over $173 million box office dollars. In addition to the movies, the video game spawned multiple live action series, including a recent web series that starred Jeri Ryan and Michael Jai White.

5. Hitman
While some might guess that big name stars, such as The Rock in 2005’s Doom or Mark Wahlberg as Max Payne, might get the fifth spot, it didn’t happen that way.  This 2007 film starred the lesser known Timothy Olphant as Agent 47, who is an assassin for hire.  The film’s total is just under $99 million and barely beat out 1994’s Street Fighter for the fifth spot.  Hitman has had four video games in its series.

This guest article was written by Sara McDowell. She is an avid Gamer and owns and operates the gaming centric site Video Game Design Schools.

Posted on November 16th, 2011 by admin | Leave a Comment
Filed Under Entertainment, Featured

WWE Vengeance results: The tag title match opened the show with Dolph Ziggler and Jack Swagger challenging Air Boom, Kofi Kingston and Evan Bourne. Kofi and Evan maintain after some good action and, immediately, Dolph Ziggler has to defend his United States championship against Zack Ryder. It’s a short match and Jack Swagger’s interference allows Ziggler to retain as well. I would have preferred the reverse results for these two matches.

The Diva’s title is next as Beth Phoenix defends against Eve. Beth and Natalya Niedhart have been on a crusade to punish the “Barbie Doll” Divas of the WWE. At least everyone else is banned from ringside for this. Eve impressed me a lot more than usual in this match, but Beth comes out on top via a Glam Slam.

Christian has to face Sheamus next despite his desire for yet another world title match. Sheamus gets a clean win which lines him up to be Mark Henry’s next opponent.

Triple H allows himself to be fairly low down the card as he teams with CM Punk against The Miz and R-Truth. It’s a good match and Triple H is still in fine ring shape, but Kevin Nash shows up again and attacks Triple H outside the ring. Why the ref ignores this is beyond me. Miz and Truth are able to pin CM Punk and Nash continues the beat down on Hunter after the match ends. So, is Nash finally cleared to wrestle? Will we see him face HHH at Survivor Series?

Is it bad I had forgotten Cody Rhodes faces Randy Orton tonight? This is non-title which makes it far more likely Randy Orton wins. Cody’s facemask remains a solid addition to his character. Both guys really give it their all and it’s a great match as a result. A distraction by one of Randy Orton’s “baggers” allows for the Cross Rhodes, but it’s not enough. Rhodes tries to steal Orton’s RKO finisher but Orton counters and this sets up Orton hitting the rope-hung DDT and the RKO for the win. Yeah, most likely outcome happens. Sometimes WWE is too predictable for their own good.

The Mark Henry/Big Show match is back. Henry has been a monster lately, bulldozing through the roster and inducting injured superstars into his “Hall of Pain.” Big Show was one of his first victims and now he’s back for revenge. Take away Henry’s title and you take away the only thing that validates his fifteen-year career. This match is way better than anybody expected. It builds well and we get an incredible spot where Henry superplexes Big Show and the ring collapses! You can bet there are a ton of replays of that spot. Neither man can continue afterwards so it’s an non-finish that should drag this feud out for a while. Meanwhile, it leaves the main event with a destroyed ring. It’s a Last Man Standing Match so that’s not as big a deal as it would usually be.

Del Rio’s announcer jumped-on and attacked Cena early on, which allowed Del Rio himself to gain an early advantage in the offense. It was a good back and forth match with some smashed tables and a lot of general violence. But Miz and R-Truth interfere near the end and that’s enough to tip the balance Alberto’s way. So Cena doesn’t get yet another title match and has a built in feud going into Survivor Series.

Expectations were low for this and I’d say the show exceeded them. The ring implosion was pretty impressive and it’s clear Miz and R-Truth will spearhead the team opposing John Cena and The Rock at Survivor Series. That’s one of WWE’s big four annual shows so it should be even better.

Spoiler Alert: (If you DVRed the ABC network finale for All My Children and have not watched it, or were planning to watch it this week via Hulu, than skip down to the Talking Dead news…) After 41 years of storytelling in the fictional city of Pine Valley on ABC, the network sends the show off in a depressing way. Sure, the series *might* be continuing online thanks to Prospect Park, but it will be a very different show with lots of new faces in the mix. I look forward to seeing how the show changes and grows online in ways broadcast TV held it back.

But lets focus on the finale and the fact that it ended on a cliffhanger. Who in their right mind thought that would be a good idea? After 41 years of stories, I think the audience deserves an actual finale. This is where the characters are as we close this chapter of their lives. We did not need a “Who did JR shoot?” mystery to cap off the series. Nor did we need  unresolved issues of who is the mystery woman that David Hayward brought back to live, or will Erica and Jackson make up? The ending felt rushed, choppy, and worst of all, incomplete. I truly hope that Prospect Part treats All My Children with the proper respect that it deserves, because ABC has not done that in the past few years. 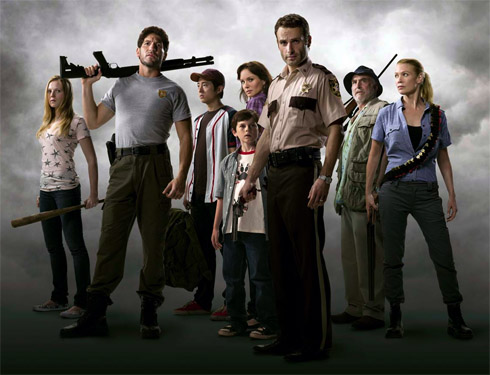 I love The Walking Dead. I’ve followed the comic since close to the beginning and I dig the series (even thought I feel like the season finale was a major miss step in an otherwise awesome season). But I honestly have no desire to watch a bunch of people sit around and talk about the episodes. AMC has announced The Talking Dead, a live talk show hosted by Chris Hardwick that will feature people talking about the episode of the show that just aired. Um… okay. Instead of wasting money on useless things like this, it would have been nice for AMC to not slash The Walking Dead‘s budget down or push out showrunner Frank Darabont. Please just focus on the show and making it as good as possible instead of trying to milk the brand for any pennies that you can get out of it.

Posted on September 24th, 2011 by ThePit | Comments Off on TV Bits: All My Children, Talking Dead
Filed Under Entertainment, Featured 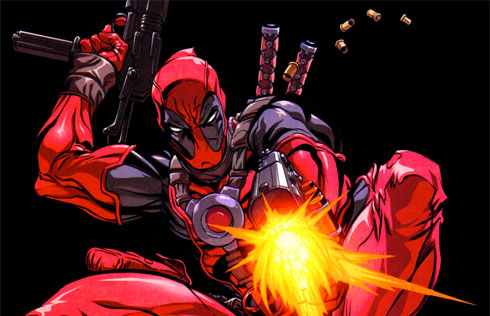 Is the Merc with a Mouth finally getting his own spinoff film? Maybe. Total Film talked with X-Men movie producer Lauren Shuler Donner and she told them that the Deadpool solo movie is back on track with Ryan Reynolds set to star in it. Donner went on to say that they are hoping “redeem him” after the crapfest that was X-Men Origins: Wolverine. While I loathed the horrible prequel, Reynolds still shined as the wisecracking Wade Wilson — even though they otherwise wrecked the character when he finally became “Deadpool”, if you want to call that thing at the end of Origins Deadpool. With a stylistic director, an upbeat comedic tone, and a R rating due to a bloody good time I could see the film being pretty awesome. Just please let it be its own thing and not a cameo fest like Origins.

While making the press rounds for her latest film, Johnny English Reborn, Scully herself Gillian Anderson is reigniting rumors of a third X-Files film being made. She told an Australian TV program that she hopes that the movie moves forward and that a script is being written. 2008’s The X-Files:  I Want to Believe wasn’t a huge blockbuster but it did pretty well and was made for a relatively low budget of 30 million dollars. Keeping the costs down and doing a new film focusing on Agents Scully and Mulder (David Duchovny) would be a smart move for 20th Century Fox. We are far enough removed from the series that they could do pretty much anything storywise. And I hope that they would reach for the stars (pun intended).

Check out these Deadpool related products…

Posted on September 8th, 2011 by ThePit | Leave a Comment (1)
Filed Under Entertainment, Featured

Superman: The Man of Steel!

Ever since they announced the new Superman reboot to be directed by Zack Synder and produced by Christopher Nolan, one of the biggest questions has been the suit. Would they redesign it (as it has in the comics)? Make it darker? Or keep the traditional red and blue tights? Well, we finally have our first look of the Man of Steel… (click to enlarge) 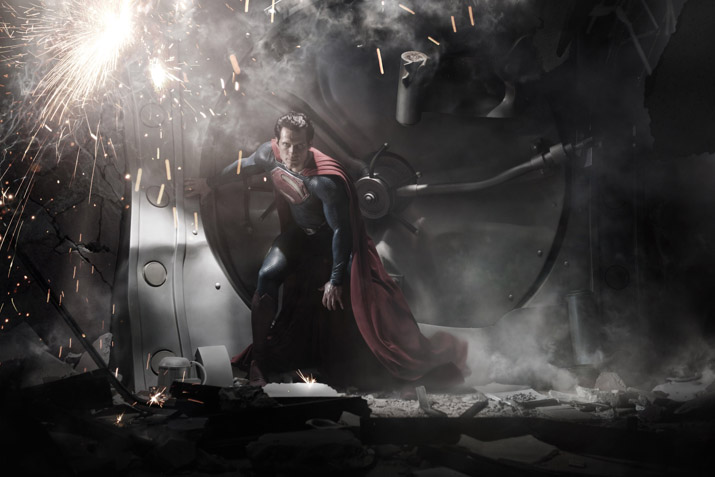 The suit is a bit darker than both Reeves and Cain’s Superman versions and is more textured (the suit here does not look like normal cloth, and has shades of Spiderman’s movie costumes). Henry Cavill sure looks the part and definitely has the presence required to portray the first superhero. I love the atmosphere around him and the giant (almost cartoony) safe door that Superman has just broken through. I can’t wait to see more from the film. Now that we have had a look at Superman, I hope we can see Amy Adam’s Lois, Michael Shannon’s Zod, and the Man of Steel supporting cast. We have a long time until June 13, 2013…

Posted on August 5th, 2011 by ThePit | Leave a Comment (1)
Filed Under Entertainment, Featured