You are here: Home // Posts Tagged With marvel comics 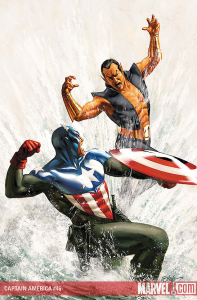 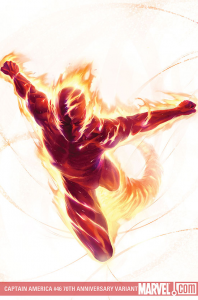 Captain America #46 hit stands yesterday from writer Ed Brubaker with art by Steve Epting. The issue is part 1 of a new 3 part story arc that sees the new Captain America (formerly Bucky/Winter Soldier) team up with Prince Namor to save the memory of an old friend.  Brubaker’s run on Captain America has been intriguing and entertaining, and this new arc looks just as good.

Posted on January 29th, 2009 by ThePit | Leave a Comment
Filed Under Entertainment

I saw this movie three times in theaters back in May. The first was an advance cast and crew screening. The second was with a good friend who wanted to go opening weekend. The third was with my mother who loves a good, hearty action flick. Every time I saw this movie it never lost credibility- it just got better and better.

Tony Stark (Robert Downey Jr.) is the high-powered CEO of Stark Industries, which, amongst other things, supplies weapons to the US Army. During a visit to Iraq to debut and demo a new weapon he finds himself under attack, captured by the enemy and forced to create a weapon to use against the US. With a piece of shrapnel dangerously close to his heart, he invents a mechanism that will keep him alive, and fuels an indestructible iron suit that allows him to escape. Upon his return, he swears to keep his weapons out of enemy hands and hones his iron suit into the super hero Iron Man.

This film is high powered, adrenaline-fueled fun. Downey is the perfect mix of sarcasm and snark as slightly alcoholic playboy, businessman, and inventor Stark. The action sequences are intense and exciting. Even the romance between Stark and his assistant Pepper Potts (Gwyneth Paltrow) is sweet and well placed. Jeff Bridges as a fellow businessman at Stark Industries Obadiah Stane is quirky and has a great compatibility with Downey as they clash both literally and figuratively. While making timely changes to Iron Man’s origin, it even stays faithful enough to the comic books to please the fans. This smart popcorn flick, along with The Dark Knight, helped to restore everyone’s faith in superhero films this year.

Best Visual Effects
The visual effects in this film are amazing, however the most impressive accomplishment in this film is practical- a sleek and believable iron suit in all of its incarnations. It’s one of Stan Winston’s last projects and it will be remembered with fondness, but I believe it will also be overshadowed by the other two visually stunning films in this category: The Dark Knight and Benjamin Button.

Posted on January 25th, 2009 by Jess | Leave a Comment (1)
Filed Under Entertainment

TV Tonight: Wolverine and the X-Men

Tonight at 8pm we have the first two episodes of Wolverine and the X-Men on Nicktoons.  In the new animated series, it has been a year since the X-Men were disbanded after the Xavier Institute was destroyed and Marvel Girl and Professor X went missing. A mutant registration act has been passed and there is an increase of violence towards mutants. After a family that Wolverine saves is punished for showing him kindness, the battle worn mutant reunites the X-Men and becomes the team’s new unlikely leader. The trailer for the new series was pretty darn good and I’m looking forward to it.

What else is on tonight?

Posted on January 23rd, 2009 by ThePit | Leave a Comment
Filed Under Entertainment 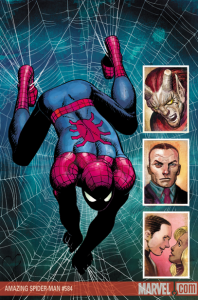 It has been a year since “Brand New Day” turned back the clock on Spider-Man, and we’re finally coming to a head on a lot of the story lines that developed since the status quote change. The New York Mayor election will be decided and the mystery behind the Spider-Tracer Killings and the identity of Menace will be revealed!  The issue is written by Marc Guggenheim with art by John Romita Jr.

Posted on January 20th, 2009 by ThePit | Leave a Comment
Filed Under Entertainment 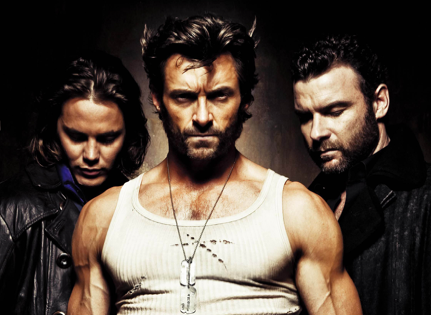 Ain’t It Cool News scored a new cast promo shot for the upcoming X-Men spin-off flick X-Men Origins: Wolverine. The image features Hugh Jackman as Wolverine, Liev Schrieber as Sabertooth, and Taylor Kitsch as Gambit (as pictured above), along with Ryan Reynolds as Deadpool and Lynn Collins as Silver Fox. You can check out the full image and a message from Hugh Jackman about the films current reshoots by heading here.

Posted on January 18th, 2009 by ThePit | Leave a Comment
Filed Under Entertainment 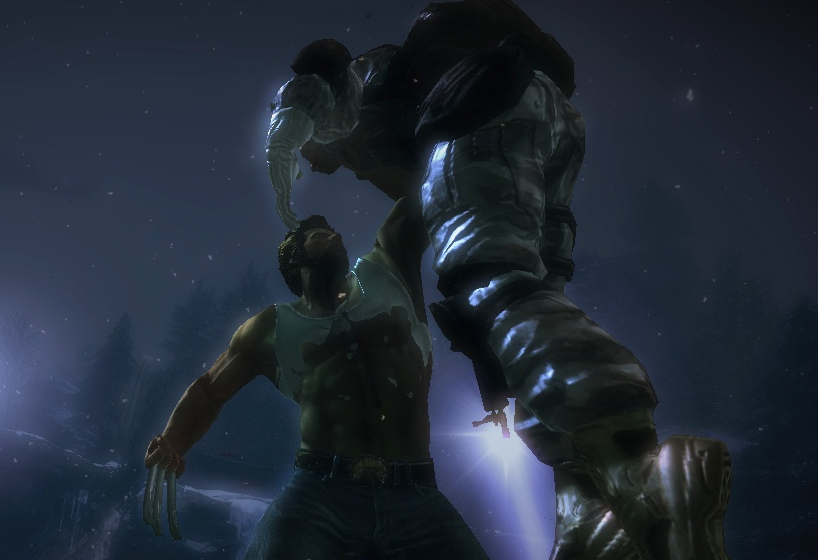 IGN has a really cool first look at the all new video game based on X-Men Origins: Wolverine.  While I usually hate video games made after films, this game sounds brutal, bloody, and very true to character for the X-Men’s wild card. It is also being developed by Raven Software, the team that brought us Marvel Ultimate Alliance and X-Men Legends. Alliance and Legends are two of the best games ever made from comic properties.  I can’t wait to see what they do with Wolverine’s origin.

You can check out more pictures and IGN’s first look at the game here. While no release date has been announced, it’ll likely hit stores in May along with the film’s release.

Posted on January 13th, 2009 by ThePit | Leave a Comment (1)
Filed Under Entertainment

This morning we got some big news on one of my most anticipated films of 2010!  Variety is reporting that Mickey Rourke, the tough as nails star of The Wrestler (best film of last year) and Sin City, is in talks to go head to head against Robert Downey Jr’s Tony Stark in Iron Man 2.

Rourke would be stepping into the red armor of Crimson Dynamo, a fan favorite villain who is Tony’s equal in power, but is ruthless and destructive.  You can learn more about the various men who have been Crimson Dynamo in the comics here.

Also in talks to play a villain in the Jon Favreau directed sequel is Sam Rockwell.Although it is unknown who Marvel wants Rockwell to portray, could it be the Titanium Man? Titanium Man and Crimson Dynamo have teamed up many times over the years to over power and attempt to take down Iron Man. This would also stack huge odds against Stark in the film.

Sadly, there is no word on if we’ll see the Mandarin or Nick Fury in the film. Lets keep our fingers crossed for some more news.

Posted on January 8th, 2009 by ThePit | Leave a Comment (2)
Filed Under Entertainment 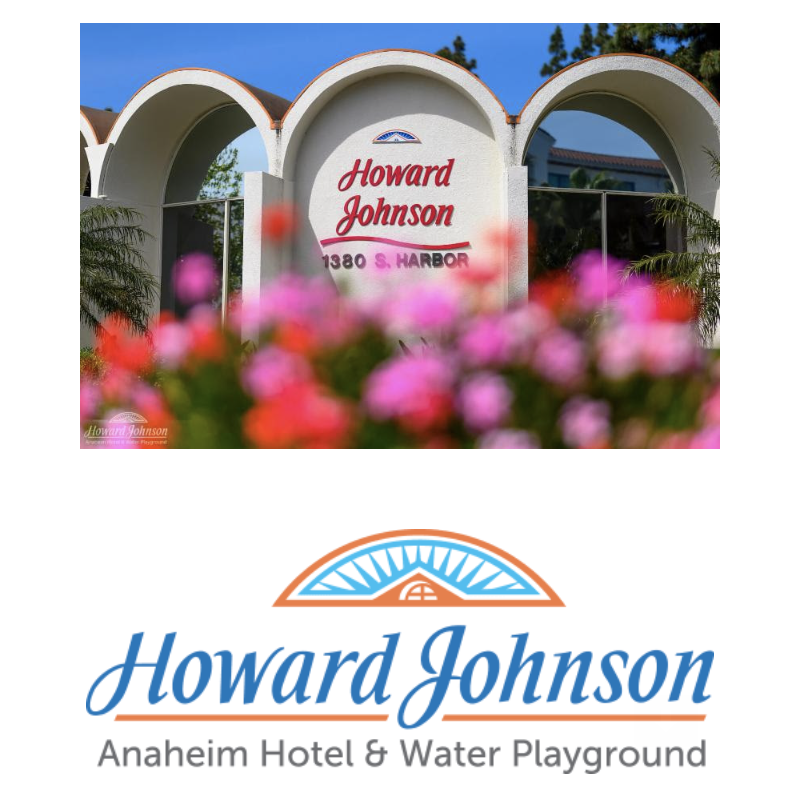