You are here: Home // Posts Tagged With odd brodsky

Odd Brodsky is a quirky comedy about a woman who quits her job to break into Hollywood. Check out all all of our coverage on the feature here. Directed by Cindy Baer and starring Tegan Ashton Cohan, Ilana Klusky, Matthew Kevin Anderson, and Scotty Dickert. You can watch the flick for free on Amazon Prime.

Posted on May 6th, 2018 by ThePit | Leave a Comment
Filed Under Entertainment 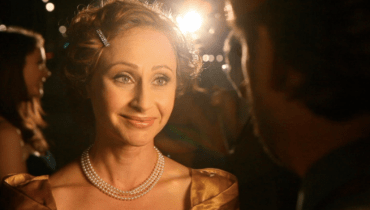 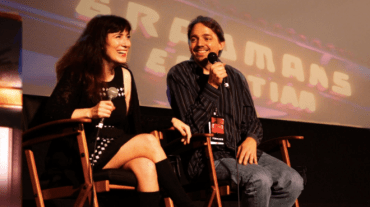 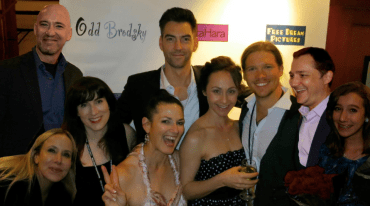 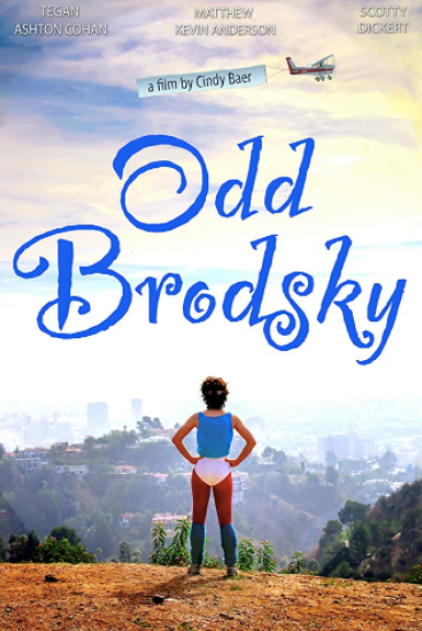 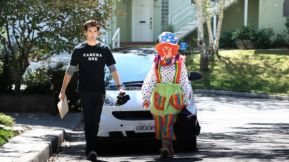 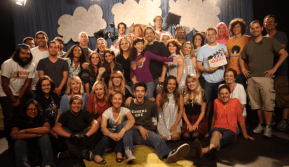 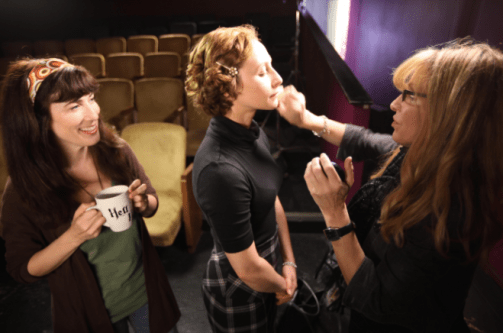 Learn more about the independent comedy Odd Brodsky in our article The 5Ws and How: Odd Brodsky and then watch it for free on Amazon Prime. The flick was directed by Cindy Baer, and stars Tegan Ashton Cohan, Ilana Klusky, Matthew Kevin Anderson, and Scotty Dickert.

Posted on November 7th, 2017 by ThePit | Leave a Comment
Filed Under Entertainment

The 5Ws and How: Odd Brodsky

We had the pleasure of discussing Odd Brodsky, a quirky reflective comedy about Hollywood, with Cindy Baer. Cindy is the actress truned director who brought the comedy feature to life.

Who?
Actress-turned-director Cindy Baer and her husband/cinematographer Matthew Irving co-wrote the screenplay for Odd Brodsky, which is a quirky comedy about a woman who quits her job to break into Hollywood. Audiences may remember Baer from her critically acclaimed debut feature Purgatory House, while Irving’s 30+ feature credits as a cinematographer include the box office “top ten” hits Waitress (which was recently adapted into a Broadway Musical) and Waiting (starring Ryan Reynolds and Anna Faris). Baer also produced, edited and acted in Odd Brodsky, appearing in the supporting role of Sammy Bank.

The standout cast features leading lady Tegan Ashton Cohan, who lights up in the screen in her first starring film role as the title character Audrey (“Odd”) Brodsky. Her younger counterpart Ilana Klusky is equally charismatic and engaging. Lovable Matthew Kevin Anderson plays Audrey’s sidekick and biggest champion, while Scotty Dickert’s hipster character Spuds brings adventure and conflict to the screen. Supporting cast members includes Christina Moses (“The Originals” TV show), Elana Krausz (About Cherry) and stand-up comedian Leigh Forrest. John Alton and Cootie Queen actress Jesse Meriwether play Audrey’s parents, while actress/singer Jolie Adamson and Jim Hanks (portraying a parody of his drag queen God role from Purgatory House) round out the main cast. The majority of the 54 speaking roles in the film are performed by women, and many of the crew positions were women and minorities.

Producer Thomai Hatsios and her talented team from Metahara joined Baer’s company Free Dream Pictures to bring this ambitious project to life, which was also made possible by the generous support of executive producers Christo DiMassas, Sharon A. Fox and Tim Smith. Supervising sound editor Victoria Rose Sampson’s extensive sound credits include over 150 features, which go back to Return of the Jedi. Her talent was passed down from her trailblazing mother Kay Rose, who was the first woman ever to win an Academy Award for sound editing. Composer credit goes to David Gonzales, while visual effects were created by Mark Alan Thomas.

What?
Odd Brodsky is a quirky comedy following the adventures of 30-something Audrey Brodsky, who’ll do just about anything to get her big break in Hollywood. Fueled by a grave-side promise to become an actress, Audrey moves from Hollywood, Iowa to Hollywood, California and finds great success! …working 40 hours a week at a steady desk job. Antics ensue as Audrey finally quits the office to create her new life as an actress. She hires a camera “crew” (just one guy who goes by the name of Camera One), and moves in with a happy-go-lucky roommate called Spuds. Life seems to come easily for Spuds, but not so much for poor Audrey, who tries so hard that she pushes away the very things she wants most. Insider jokes about living in Los Angeles bring forth some amusing social commentary about the importance we place on celebrity… but don’t be fooled: beneath the gags lies a bittersweet story that proves both inspiring and realistic. Although this tale is industry- and female-centric, anyone who’s ever felt stuck, disconnected or invisible will relate. In the end, we are reminded that validation and happiness have little to do with fame. What most people want is to be connected: with ourselves, each other, and the world.

Stylistically inspired by Wes Anderson’s Rushmore, the Coen Brothers Raising Arizona, and Jean-Peirre Jeunet’s Amelie, the world of Odd Brodsky features extremely earnest characters, a heightened sense of reality, a mandolin score, tableau compositions, and even a bit of magical realism. What makes Odd Brodsky different from most features at this micro-budget level is the large scope of the project. It’s a broad comedy (not horror or thriller) that spans multiple time periods, and was filmed at over 30 locations. It features a large cast of 54 actors and more than 80 music cues while incorporating dozens of visual effects that help to fully create the world of the movie. There’s also rain, smoke, kids, animals, and even a musical number during the end credits. And no story about Hollywood would be complete without a glimpse of the Hollywood sign.

Matthew Irving’s cinematography is traditionally-lit and ever-present, although attention is never drawn to it. Precise framing includes carefully-planned compositions and tableaux, as well as many “oners” where you will often find the camera focused on several characters in frame at once, allowing the audience to choose which actor to watch. VFX guru Mark Alan Thomas designed and composited dozens of “real world” effects, which help to fully create the world of the movie, including everything from the billboards and license plates, to the plane-pulling-banner, and even the Musso & Frank inspired sign, which was parodied as “Fred & Ginger’s”. David Gonzalez’s mandolin score incorporates classical pieces by Vivaldi and Bach, as well as providing contemporary new pieces and even a few parodies. Songs include “Precious Little Life” (an unreleased gem by Grammy-nominated Eric Bazilian of The Hooters), as well as Dr. Hook’s nostalgic “Sharing the Night Together”, which hit #6 on the song charts in 1978.

Where?
Odd Brodsky begins in the fictional town of Hollywood, Iowa, and then moves to Hollywood, California. It was shot at 30 locations all around the Los Angeles area, including Burbank, North Hollywood, Silverlake, Hollywood, and also at the Laemmle Music Hall Theater in Beverly Hills.

When?
The movie was shot over a period of 20 days in August and September of 2011, and completed just one week before its sold-out World Premiere at the 36th annual Mill Valley Film Festival in the San Francisco, in 2013. There it appeared in a slate of much bigger-budgeted, star-studded movies, seven of which went on to be Academy Award nominees and/or winners. Odd Brodsky then criss-crossed the country, screening at a total of 29 film festivals all over North America and winning 21 festival awards. It premiered on iTunes in November of 2016 and expanded to other platforms like Amazon and Vudu in early 2017 where its currently available for streaming.

Why?
The initial spark for Odd Brodsky came to director Cindy Baer when she was winding down the festival run of her first feature Purgatory House. She’d received numerous personal emails and messages from audiences all over the country who had deeply connected with her debut film. She loved the feeling that movies could affect people is such a strong way, and hoped her next project could provide a similar experience — even if that seemed like a tall order.

Baer and her husband/co-writer Matthew Irving found themselves at a film festival in Massachusetts, and began musing about the idea that a person can be very skilled at one thing, and yet feel compelled to pursue something entirely different as a career. The writing duo quickly realized there was inherent comedy in this common and bittersweet disconnect.

Feeling particularly inspired by the tone of Wes Anderson films, they wanted to make a light-hearted film with hapless characters that audiences would be rooting FOR instead of laughing AT. This new project would also share the same overall theme as Baer’s first feature, which is that people are ultimately responsible for the lives they create for themselves. She and Irving put pen to paper and outlined the first story beats right there, in a little bed and breakfast.

This story seemed like the perfect opportunity to share a message of empowerment, reflecting one of Baer’s own life philosophies: if you follow your gut feelings, life leads you to where you’re supposed to be. And along the way, you’ll meet the right people, create opportunities, and find what you’re meant to be doing. As such, the movie is basically a love letter to anyone who feels stuck. Sometimes you just have to take that first step, do the work, and then trust that the rest will follow.

Posted on October 7th, 2017 by ThePit | Leave a Comment
Filed Under Entertainment, Featured