You are here: Home // Posts Tagged With robert pattinson

This past week at the San Diego Comic Con, fans of Twilight got a treat with a panel that featured author Stephenie Meyer, and cast members including Kristen Stewart, Robert Pattinson, Taylor Lautner, Peter Facinelli, Elizabeth Reaser, Nikki Reed, Kellan Lutz, Ashley Green, Jackson Rathbone, and new to the cats, Mackenzie Foy. During the panel they introduced footage from “Breaking Dawn Part 2”, included in the footage was Bella (Stewart) dealing with being a vampire and the bloodlust that comes with it, along with her hunting down a mountain lion. Personally, I’m not a fan of the Twilight series and while it has had a positive effect of bringing vampires back in the spotlight, these aren’t vampires in any classic sense of the word. They go out in sunlight (and sparkle), have reflections, and none of the classic weaknesses (ugh). Pardon the pun, but the vampires of Twilight are completely toothless. Thankfully we do have reasons to care about vampires. And with Twilight going away, the doors will be open for some good vampire movies and fiction to return.

Its funny how easily it is to forget that Shia LaBeouf is actually a good actor. The three unwatchable Michael Bay Transformers made him into a laughable caricature of himself, but this is the same kid who starred in A Guide to Recognizing Your Saints, Disturbia , and even Holes. He has talent, he just isn’t able to show it that much. Hopefully Lawless changes that trend. In the movie, based on the book The Wettest County in the World, LaBeouf co-stars with Tom Hardy as the Bondurant Brothers, two bootleggers in Prohibition-era Virginia who are threatened by authorities who want in on their profits. The mvoie’s awesome cast includes Gary Oldman, Jessica Chastain, Mia Wasikowska, and Guy Pearce. In addition to Lawless, Shia LaBeouf also has an illustrated book of poetry called Let’s Fucking Party. With no more Transformers in his future, lets hope Shia is able to rebuild his credibility.

Robert Pattinson and the Cullens family get the spotlight in the new Eclipse poster. The film comes out on June 30th.

I’m not a fan of the Twilight series, but boy are they putting these out fast.  Can’t we get Terminator or Die Hard movies out like this? A series I’d actually want to see every year…

Posted on May 21st, 2010 by ThePit | Leave a Comment
Filed Under Entertainment

Here it is, the new movie poster for the Twilight sequel New Moon…

Okay, we’re back in the smoky woods, there is nothing wrong there. We have the main cast, check, a cool logo, double check… Ah, guys? I didn’t know that the plot of New Moon involved Edward and Bella fighting each other for Jacob’s love. But there we have it, Jacob in the middle of them, turning away from the woman of his dreams and looking like it is taking everything in him not to profess his love to the vampire with a soul who sparkles. Meanwhile, said vampire is glaring at Bella and were his arms always that disproportionate? I mean his right arm is either freakishly long or the left one is a bit too slumpy.

What do you think about the poster? Am I being too mean here?

Hardwicke is off the Twilight sequel!

It truly is a “New Moon” for Twilight fans as Catherine Hardwicke has been taken off the sequel to the vampire romance. Variety is reporting that Hardwicke and Summit Entertainment had very different, and strong, opinions on where they should go with the sequel.

“The debate was how to focus the adaptation of the second book, which deals more with giant werewolves than vampires, as well as the long depression of Bella Swan (Kristen Stewart), after her vampire lover (Rob Pattinson) leaves her.”

Personally, I think this is the best route for Summit to take to save the franchise for future adaptations. Twilight was a mess of a film with horrible direction from Harkwicke, and while it did decent box office, it has been critically panned across the board. Fresh blood could save this series the same way that Alfonso Cuarón’s masterful Harry Potter and the Prisoner of Azkaban lifted the boy wizard from two mediocre films from Chris Columbus.

It is just really refreshing to see a company that doesn’t have tunnel vision with box office numbers, and honestly wants to make a better film.

Posted on December 8th, 2008 by ThePit | Leave a Comment (1)
Filed Under Entertainment

Last week we got a handful of new photos from the film adaptation of Twilight, and now we have a new poster.  Pictured above, the poster features Edward (Robert Pattinson) and Bella (Kristen Stewart) in the foreground with the movie’s trio of villains, James (Cam Gigandet), Laurent (Edi Gathegi), and Victoria (Rachelle Lefevre), in the background.

Continue reading to check out the Bella and Edward character teasers.

END_OF_DOCUMENT_TOKEN_TO_BE_REPLACED

Posted on October 28th, 2008 by ThePit | Leave a Comment (2)
Filed Under Entertainment

We are fast approaching the release of the vampire love story adaptation, Twilight, which hits theaters on November 21st, 2008.  Based on the novel of the same name by Stephenie Meyer, the film follows a 17 year old girl, Bella (Kristen Stewart), who moves to Forks, Washington, where she falls in love with Edward Cullen (Robert Pattinson), a vampire with a tormented soul.

A lot of new photos from Twilight have been released. Click to enlarge.

Twilight is the first part of a four book series, followed by New Moon, Eclipse, and Breaking Dawn. Production has already begun on New Moon.

Posted on October 20th, 2008 by ThePit | Leave a Comment (6)
Filed Under Entertainment

At this years San Diego Comic-Con, Summit Entertainment showcased three upcoming films in their panel; Push, Knowing and the highly anticipated Twilight. Keep reading to find out what was revealed.

They started off their panel with a trailer for a film called Push, about those with super powers that live amongst us. They brought out cast members Chris Evans, Camille Bella, and Djimon Honsou, plus director Le to talk about the film and show some more clips. Poor little Dakota Fanning was stuck in a massive traffic jam on the I-5 and couldn’t make it to the panel, but in the first clip we were all able to see how much she’s grown up in an action sequence with herself and Chris Evans running from the villains of the film. She plays a “watcher” (those that can see the future), while Evans plays a “mover” (telekenetic) and Camille Bella and Djimon Honsou are “pushers” (those who can put thoughts into others heads). The problem with this film was that Comic-con should be its target audience, yet the crowd didn’t seem too enthused, myself included.

Here’s the next Nic Cage flop a la Next, amongst others. The concept is actually pretty spooky: a code is unearthed through a school time capsule that predicts every disaster and the death toll that will accompany it. These disasters seem to follow Nic Cage around as he goes crazy cracking the code. They showed the trailer and the director came out to discuss it a bit, but all in all it looked pretty forgettable.

I didn’t know what a “Twilighter” was until a few weeks ago when I read an article in Entertainment Weekly. Despite this, there was no amount of reading that I could have done to prepare me for this panel. I had seen young girls in “Team Edward” and “Team Jacob” t-shirts standing in line that morning (and the night before for that matter), but the deafening screams that came from the crowd when this came onto the screen were absolutely insane: 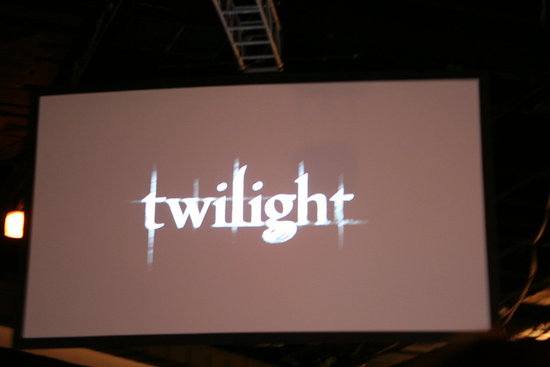 I’ve had Twilight sitting on my bookshelf for a few months now and have been putting off reading it until the movie gets closer. I knew it was popular, and it seems like I’ll love it, but I had no idea that there was such a gigantic following of young girls. This was something Comic-con has never seen before. The girl to guy ratio at this panel was at least 5:1. The Q&A attracted shaking 12 year olds walking up to the mic and professing their love for Stephanie Meyer and the hunky Robert Pattinson who plays the impossibly beautiful vampire Edward. The panel consisted of director Catherine Hardwick, author Stephanie Meyer, and actors Kristen Stewart (Bella), Robert Pattinson (Edward), Cam Gigandet (James), Rachelle Lefevre (Victoria), Edi Gathegi (Laurent), and Taylor Lautner (Jacob). Every time Robert Pattinson came on the screen, tried to speak, or was addressed, the crowd erupted in girlish screams and shrieks. The poor guy couldn’t get a word in edgewise. He was a far cry from Cedric Diggory, with his spiky gelled hair, seriously fanglike teeth (which is funny because supposedly Twilight’s vampires don’t have fangs), and spacey attitude. Kristen Stewart was cute, punky, and incredibly nervous and intimidated by the crowd. They showed a clip of a fight sequence between Edward and James with Bella and it looked incredible. It looks like this film will both please the fans and be easy for the non readers to watch as well.

Just before the panel ended, the mod announced that someone just wanted to say hello. Little (or not so little anymore) Dakota Fanning came out and graciously thanked the audience for coming to see the Push panel and apologized profusely for being stuck in traffic and not being able to attend the panel. She was such a cutie.

Posted on May 6th, 2008 by Jess | Leave a Comment
Filed Under Entertainment